The ideal router for the majority of homes will be one that allows them to stream Netflix on several devices without experiencing any disruptions. Those kinds of demands are difficult for more basic single or dual-band routers to fulfill, so you’ll likely have to spend more money on a more premium one. Thank goodness for Linksys, which has created a value-oriented router that will allow everyone in your household to watch their favorite shows concurrently and without buffering.

The router was put to the test in a household environment for nearly a week to evaluate how it performed in regular surfing, streaming, and gaming with numerous devices. The results were positive. 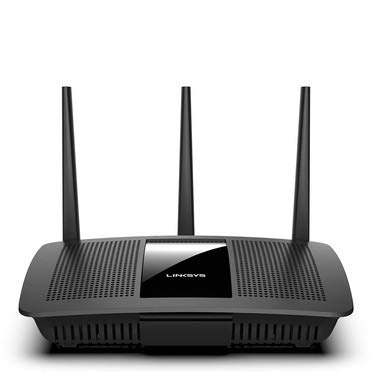 These days, a large number of wireless routers are being introduced with sleek, contemporary designs that encourage you to display them rather than conceal them behind a fern. On the other hand, there are a number of gaming routers that have strong red accents to give them a “gaming” appearance. Consequently, when we opened up the Linksys Max-Stream AC1900 and saw that it was a plain black piece of plastic with no distinguishing design features, we were surprised and disappointed.

Do not see this as a criticism, since the design will assist it to blend in with the surrounding environment. We understand that no one wants a router that is so unsightly that it must be concealed, so we appreciate that the Linksys Max-Stream AC1900 is essentially inoffensive.

This router is totally black, and instead of a slew of status LEDs, the Linksys logo is the only thing that is lighted on the front of the device. Instead, the LEDs that would alert you to any faults are positioned around the rear of the device, where they would not draw your attention to them. We understand that this might be a double-edged sword if difficulties occur, but we admire the emphasis on a subtle design.

The Linksys Max-Stream AC1900 includes four Gigabit LAN ports on the rear and two USB ports — one USB 3.0 and one USB 2.0 — for connecting network-attached storage, making it an excellent choice for those who are seeking a router that is focused on streaming video rather than hard-wired connections. By no means is there an abundance of connection, but the Max-Stream makes up for it by putting a strong emphasis on wireless performance and reliability.

Even though it isn’t the fastest wireless router on the market, the Linksys Max-Stream AC1900 provides dependable wireless connectivity with three antennas and MU-MIMO technology (or multi-user, multiple-input, multiple outputs) that allows it to manage streaming to several devices at the same time.

It would be difficult to find two words to characterize the performance of the Linksys Max-Stream AC1900 other than “good enough.” Despite the fact that it is not likely to cause any issues with your network, we did detect minor swings in network performance.

The Ookla Speed Assess app was used to test the network performance of the Linksys Max-Stream AC1900 while we carried an iPad throughout our house to see how well the network functioned in different regions of our house. While we were able to get the download speeds we were paying our ISP for, we did observe some changes in the network speed throughout each of the tests we performed. On the whole, it would start off at roughly 85Mbps and gradually reach 250Mbps throughout the length of the 10-second test period. The majority of customers are unlikely to be inconvenienced, but anyone who relies on a consistent download speed should be informed of the situation.

Every other component of the router, on the other hand, operated well. MU-MIMO technology worked well for us, allowing us to stream Netflix on several computers, tablets, and phones at the same time, not just across our 2,000 square foot home, but also throughout the rest of our neighborhood. The Linksys Max-Stream AC1900 network adapter handled it with ease.

In terms of performance, the router achieves its goals, providing a superb streaming experience at a reasonable price. It isn’t the most expensive router on the market, but it isn’t attempting to be one. If all you’re looking for is a router that will allow everyone in your home to stream without interfering with one another’s speeds, you really can’t go wrong with this one.

If you don’t want the fastest wireless router available on the market and are simply looking for something that will allow you and your family to stream without interruption, the Linksys Max-Stream AC1900 is a solid choice. In terms of performance, it is high-end enough that the ordinary user will not notice any notable slowdowns, yet it is priced reasonably enough that it will not make your pocketbook weep. If you’re looking for a mid-range router, the Linksys Max-Stream AC1900 is a great choice.