Mesh networks are now available in abundance, and the latest model from Asus adds to the company’s already impressive line of products. Designed to be tucked away in almost any corner of your home, the ZenWifi AX Mini Router is an adorably cute mesh WiFi system that will provide you with hassle-free high-speed Internet access.

In comparison to more expensive models such as the ZenWifi AX, you will have to give up a few things in order to save money (XT8). The most significant disadvantage is that there is no wireless backhaul, which means that both your network traffic and the traffic from the nodes are transmitted on the same band. Even if you choose to use wired backhaul, you will need to purchase a switch in addition to the nodes because there is only one LAN port on each of them. 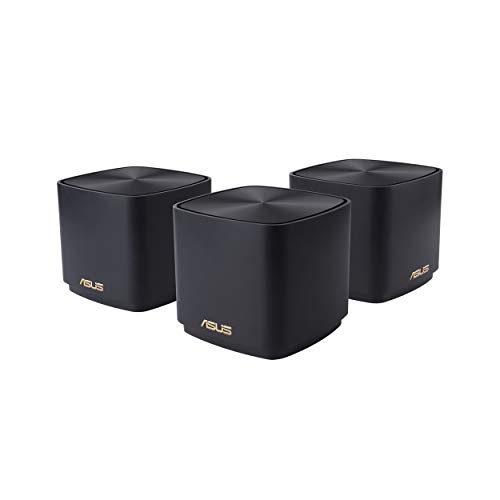 In terms of speed, the ZenWifi AX Mini still manages to deliver some respectable coverage and speeds, so even though it is not as feature-rich as the larger ZenWifi AX (XT8), you should be able to get by with this small mesh network setup quite well. If you have any devices that are capable of taking advantage of next-generation Wi-Fi 6 speeds, then this is an excellent choice for your living space; however, even older devices will benefit from the increased coverage.

The ZenWifi AX Mini’s actual satellites are ridiculously small, which is something we absolutely adore about it. Because they honestly look like little mini Bluetooth speakers (and are available in either white or black), you won’t have to deal with tangled cables or unsightly Wi-Fi antennas protruding from your device.

It is critical to understand that, despite the fact that all three units appear to be identical, they are in fact distinct from one another. The router is the only node on the network (which is clearly marked), and it has a WAN port to which you can connect your Internet cable. The other two units are satellites that serve to extend your network’s reach, and they each have a single LAN port.

You can connect a device to the LAN port in order to improve performance, or you can run a cable all the way back to the main router node in order to provide wired backhaul support. There is only one problem with this setup: because the router only has one spare LAN port, you will need to purchase a switch in addition to the router in order to connect both satellite nodes together. If you want the best connectivity over large areas, then this is a must-do, even if it means making an additional investment. Additionally, because there is no USB port on the router, you will be unable to share devices or storage media on your network, as you would be able to do with larger routers.

The setup process for this router is similar to that of most others from Asus. Simply take the router out of the box, connect the power and WAN cables, and then connect your nodes. If your nodes and router are all plugged in next to each other during setup, this will ensure that everything is properly configured. Once you have finished configuring everything, you can move the satellite nodes to the locations in your home where you will need them the most.

You can configure the ZenWifi AX Mini using the dedicated router portal, or you can download the Asus app and follow along on your phone, which is what we did in this tutorial. Network settings and security will be covered in detail during the setup. You have the option to run both 2.4GHz and 5GHz networks under one name, or to separate them out into two separate networks. After you’ve answered a few more questions, your network will be up and running in no time at all.

During our week of testing the ZenWifi AX Mini as our primary Wi-Fi network, we experienced no network dropouts or interruptions on any of the devices that were connected to the network. The network speeds were also satisfactory, especially considering that we were not using a wired backhaul in our configuration.

We recommend using at least one additional satellite node in addition to the main router in order to achieve the best coverage. Because our 600 sq ft apartment only had one satellite node and one main router, it was simple to blanket the entire space in Wi-Fi, effectively eliminating virtually all dead Wi-Fi zones. Although I was streaming music in the bathroom while keeping the door closed, the ZenWifi AX Mini appeared to be unaffected by this, and the connection remained stable throughout.

With this model, you have to make a few compromises in terms of security. Although there are some parental controls, they are minimal, with the only option being to turn off the internet at specific times, rather than the proper filtering controls that we have seen on other Asus routers.

This is compensated for by Asus’s free AiProtection feature (powered by Trend Micro), which scans your network for devices that have been infected by malicious software or bots on a regular basis. As with the previous model, it is lacking in security features such as DDOS protection, but this is something that can be obtained by purchasing a more expensive router.

There is also a Quality of Service (QoS) option that allows you to prioritize network traffic from specific applications, but this is best reserved for advanced users. Once enabled through the router’s web interface, you can specify which applications and types of web traffic should be prioritized – for example, FTP and P2P – or you can scroll through the limited selection of available games to prioritize them. Advanced users will appreciate the flexibility, but new users who want to temporarily prioritize media streaming or gaming for a few hours may be perplexed by the options available.

The ASUS ZenWiFi XD4 is a fantastic entry-level WiFi 6 mesh WiFi system with a lot of features. In comparison to the previous ASUS Lyra, it performs significantly better thanks to a more stable firmware and increased reliability. When it comes to everyday tasks such as 4K streaming and video conferencing, the speed is more than adequate.

In general, the ZenWiFi XD4 is a fantastic product for those looking for an ASUS mesh WiFi system, and it comes highly recommended. Despite its smaller size, it provides adequate WiFi coverage, and the WiFi 6 AX1800 radio provides excellent performance. Although it does not include all of the features available on the more expensive ZenWiFi XT8, it should be sufficient for the majority of users.