The Asus Wi-Fi 6E Gaming Router, also known as the ROG Rapture GT-AXE11000, is an excellent choice for people who want to keep their network on the bleeding edge of wireless technology. As a member of the Republic of Gamers series, it is designed to seem like a high-end gaming gadget, complete with several antennae, styled angles, and lighting, among other features.

Wi-Fi 6E is a relatively new advancement in wireless standards, having appeared not long after Wi-Fi 6 in terms of time. You may get a complete list of the improvements made to Wi-Fi 6 by visiting this page. To provide a more succinct explanation, this newest wireless standard includes an extra frequency of 6 GHz that has less interference and better latency. It also provides an additional seven 160 MHz ultra-wide channels to increase data transmission speeds.

However, keep in mind that Wi-Fi 6E-capable clients are still in their infancy, and we had to do our testing on a Wi-Fi 6 card for the time being. As a result, it may take some time before the full potential of this router’s cutting-edge capabilities is realized. On the other hand, future-proofing a purchase may frequently be a wise idea, particularly in the case of high-end technology. A router like the GT-AXE11000 costs $549, and you don’t want it to be out of date in a month, let alone a year after you purchase it. 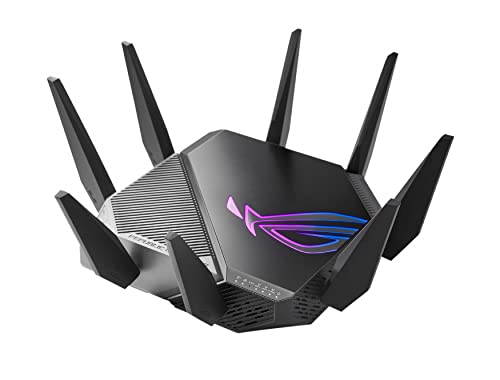 The ROG Rapture GT-AXE11000 is a high-end router that features a horizontal design with eight big and positionable antennas, which is pretty usual for this class of devices. Despite the fact that this router does not have any visually intriguing angles at its corners, it does have a contemporary design without appearing excessive.

We also love that it includes a physical power switch, which makes it simple to restart the device. With dimensions of 10.4 x 10.4 x 2.9 inches (26.4 x 26.4 x 7.4 cm) and a weight of 3.94 pounds (1.79 kg), it is unquestionably a substantial router. As well as having the ROG logo imprinted over the top, it also features RGB LEDs to illuminate the whole thing.

We particularly enjoy that the illuminated logo may be turned off to suit deployment in a bedroom or television area. Power and reset buttons are located on the right side of the device, and a pair of USB 3.2 ports are included as well.

Aside from USB, the GT-AXE11000 includes a variety of ports that provide certain features not available in other routers of a similar price range. To begin with, there are four Gigabit LAN connections and one Gigabit WAN port on the system, which is rather impressive. Next, this router goes one step further by including a 2.5G WAN/LAN port, which increases versatility while also ensuring that data delivered over this port receives “top priority.”

Another alternative is to employ Link Aggregation to leverage both the Gigabit WAN port and the flexible LAN/WAN port as an extra Gigabit port for higher-bandwidth WAN, allowing for more efficient use of the available resources. This router’s hardware specifications include a 64-bit, 1.8 GHz quad-core CPU, 256 MB of flash storage, and 1 GB of RAM. It also has a USB 2.0 port.

When there are just a few Wi-Fi 6E customers, it might be difficult to test a Wi-Fi 6E router properly. Our testing was carried out with an Intel AX201 wireless card and the 22.40.0.7 driver, both of which were available at the time of the publication.

Wi-Fi 6E is not supported by this chip, however, an upgraded version of the chip, the AX210, does support this newest standard.

Despite the fact that we were only able to test the Wi-Fi 6 portion of the router, we were still able to obtain our greatest throughput results yet. The 5 GHz close test produced 1401.2 Mbps and 1142.5 Mbps while 30 feet distant, demonstrating that even without the latest and greatest, the router performs admirably with Wi-Fi 6 devices.

We found that the ASUS ROG Rapture GT-AXE11000 WiFi 6E did not perform exceptionally well in our network congestion tests, despite its incredibly high throughput. With our laptop connected to the dedicated gaming port, things got off to a good start, but we are baffled as to why our Overwatch game had a higher latency score when there were no background movies playing.

The frame rates were consistent, and we obtained a maximum of 125.5 frames per second while simply playing the game. Aside from that, we only saw a single PingPlotter spike across the three wired testings, and it was with ten 8K background movies playing in the background and the QoS turned off, so it was hardly surprising. Firmware Version 3.0.0.4.386.42489 was utilized, which was the most recent available at the time of testing.

Each time it was switched on and tested, the Quality of Service setting proved to be a disappointment. This was unusual since we had never seen this before on any other Asus router, and Asus routers typically perform quite well in network congestion tests.

QoS, on the other hand, decreased the frame rate to the lowest we had seen in any of the three connections tested (wired, 2.4 GHz, and 5 GHz). As a result, when using the newest firmware, the user is best off turning off the QoS.

We were shocked to see such low Quality of Service performance from this brand, as it has often performed well in our congestion tests. In order to investigate this further, we discovered the only previous version of firmware accessible for the AXE11000, Version 3.0.0.4.386.42026, and manually flashed the router back to this version of the firmware.

The lost frame rate was also less frequent while using this firmware, regardless of whether or not the Quality of Service (QoS) feature was enabled. In conclusion, users experiencing issues with the current firmware at the time of this writing should reinstall the original firmware on their router, although we expect Asus to quickly address this issue in a future update, giving them both the improved latency of the newer firmware as well as the improved performance on congested networks that we observed when running with the older firmware, as we did when testing with older firmware.

The ROG Rapture GT-AXE11000 demonstrates that adopting a new standard early on, in this case, Wi-Fi 6E, is not without its challenges, as the device demonstrates. We commend the extremely fast Wi-Fi throughput, the ease of setup, the integrated security, the support for OutFox, and the flexibility of the wired ports, which allow for link aggregation, among other things.

There are, however, several significant downsides, including the expensive pricing, poor QoS performance in our tests with the most recent firmware, the huge size of the router, and the unavailability of Wi-Fi 6E clients at the present time. Rolling back to the old firmware resulted in improved performance on the majority of fronts, albeit at the expense of increased latency. Furthermore, having to utilize outdated firmware is not ideal because security vulnerabilities and other concerns are frequently addressed through firmware upgrades.

It’s not uncommon for early adopters of cutting-edge technology like this to pave the way for others, and we’re looking forward to the higher speeds and reduced interference that Wi-Fi 6E will bring once the price of this new equipment drops. For those willing to pay for cutting-edge networking equipment, both in terms of money and buggy firmware, the ROG Rapture GT-AXE11000 is a good option to take into consideration.

It did, however, provide some of the most rapid throughputs we’ve observed from a router yet. Most consumers, on the other hand, should definitely seek elsewhere or wait until more Wi-Fi 6E devices find their way into households before diving into the realm of 6E routers. Perhaps by then, Asus will have resolved the firmware difficulties that we found when testing the Rapture GT-AXE11000, which we reported earlier.